All the means of the samples become normally distributed as when it reaches around the true mean of the population as and when we increase the size of the sample. This further implies that the variability of the sample decreases by increasing the sample. It involves the estimation i.e judging the characteristics of a population and test the hypothesis i.e calculating the evidence for or against the research problem.

The mean of that distribution µ with standard deviation :

where σX represents the standard deviation of the population. The selection of a statistical test depends on the type of data that is collected.

Variables are divided into three categories: nominal, ordinal and interval 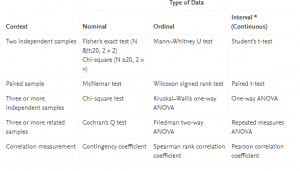 The table shows that the test that can be used to investigate the hypothesis. For instance, we can use chi-squares when data is nominal or Friedman’s two-ways can be used when data is ordinal etc.

Nominal Data: When the sample is placed within two or more categories.

Ordinal Data: When the data is represented in rank.

Hypothesis testing is a sort of analytical inference that involves testing the analytical question based on the study.

The hypothesis to be tested is called the null hypothesis: Ho.

We test the null hypothesis against an alternative hypothesis: Ha.

It is important to run hypothesis testing in order to check the reliability of the sample chosen. The hypothesis obtained from the researcher’s hypothesis about any social event is called a hypothesis. It is usually assumed that the hypothesis is true or accurate while investigating.

Testing hypotheses subject to either confirmation or disconfirmation of test hypotheses. To check or test the hypothesis we need to decide how much difference should be there between the means in order to reject H0( null hypothesis). To measure the foremost important step is to choose a level of significance for the hypothesis tests.

Type II error:  This error occurs when we fail to reject the null hypothesis when it is actually false.Type II error is more common than type 1 error.

Test the hypothesis, determine the error, find solutions and conduct the test effectively.